HMD entered the Android tablet space with the Nokia T20. It’s a budget-councious tablet aimed at small children, as well as kids and teens going to school. HMD is positioning this tablet as a media consumption device that can also handle whatever work you throw at it. 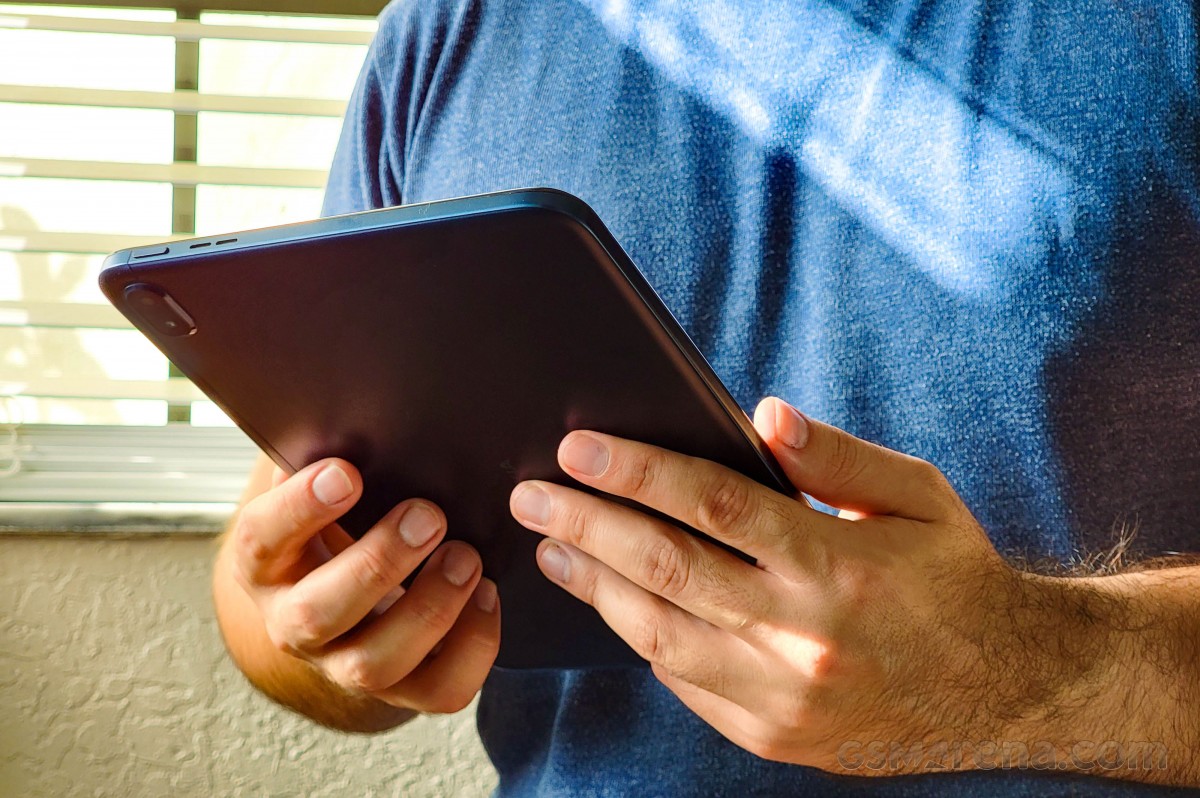 The company calls back Nokia’s classic reputation for sturdily built cell phones and boasts the T20’s aluminum exterior build. Aside from the 2K display, front and rear-facing cameras, and FM radio. There’s also a 3.5mm headphone jack, and a large 8,200 mAh battery.

Nokia T20 specs at a glance:

The T20 is powered by a Unisoc chipset with an octa-core CPU that goes up to 1.8GHz, 4GB of RAM, and 64GB of storage.

The tablet features Nokia’s OZO Playback for an immersive listening experience. Also, HMD claims the dual microphones should be able to work excellently in noisy environments – which we’ll be testing. 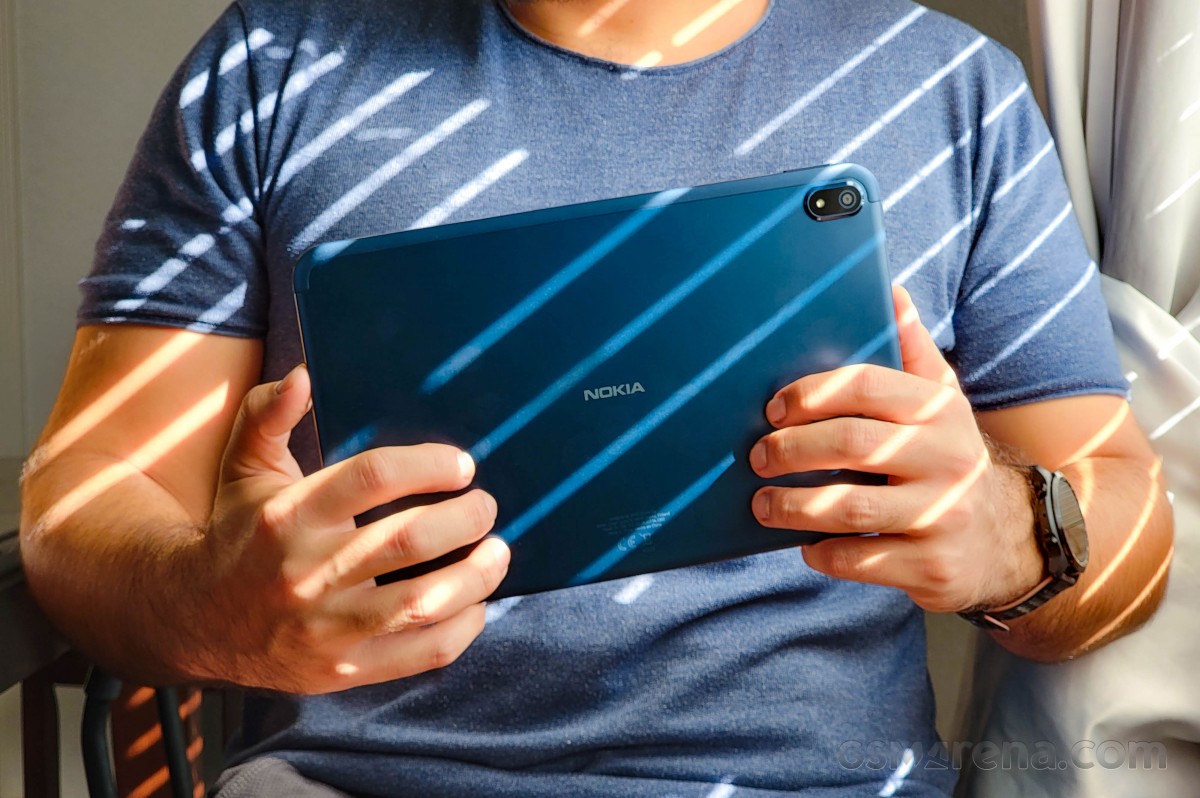 Let’s start with the unboxing and see what’s inside. Despite the Nokia T20’s compact packaging, it does charger in the box, along with a charging cable and eject-tool for the microSD card tray. At 10W it’s not the speediest brick around, but it will get the job done. 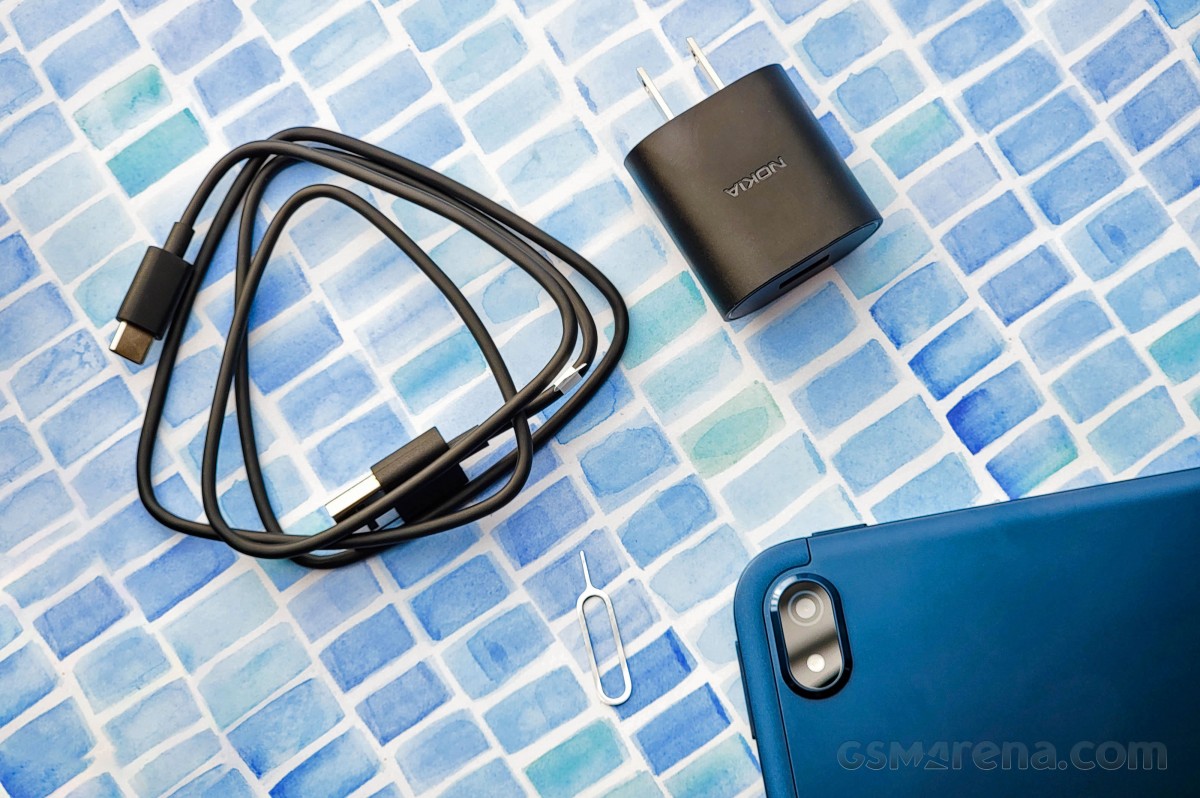 The Nokia T20 has an aluminum unibody design with sandblasted finish that feels nice against your palm. With its 10.4-inch IPS display, this is by no means a one-handed device. It has a 5:3 aspect ratio which is nice for reading in portrait or consuming content in landscape. It measures 247.6×157.5×7.8mm and weighs in at 465g. 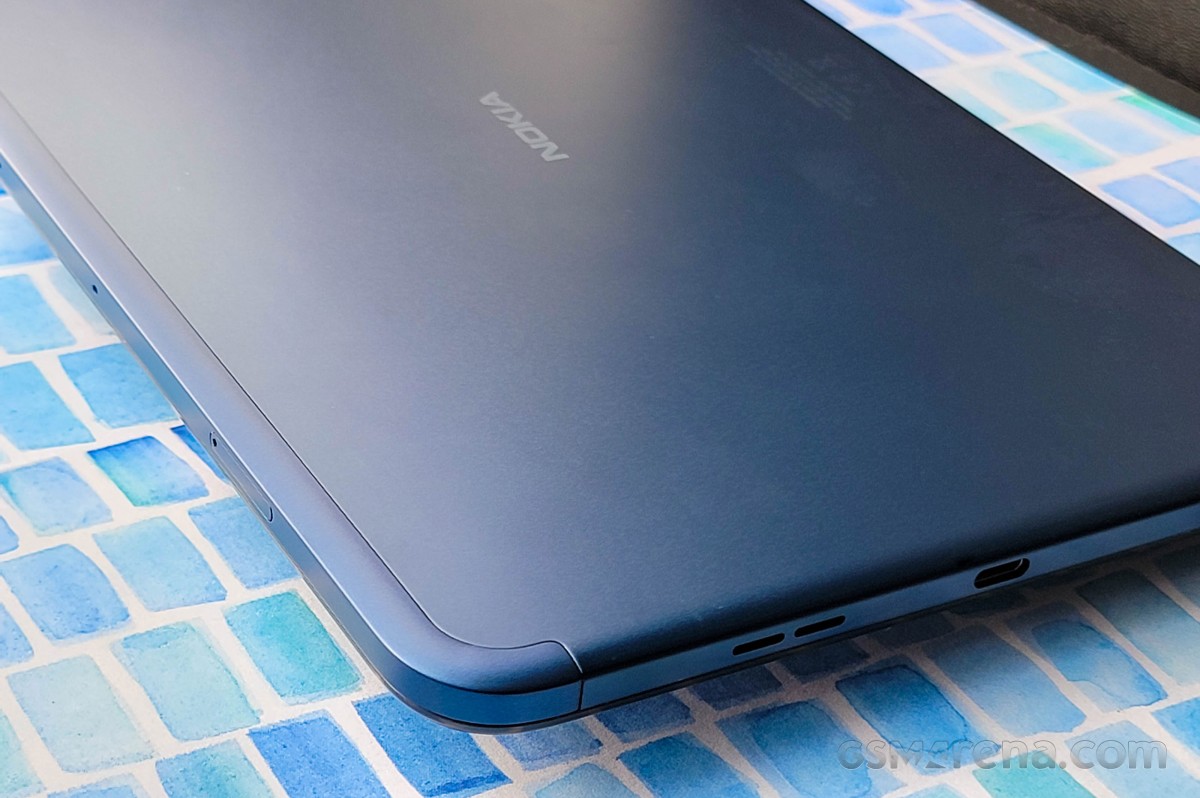 There’s an 8MP main camera with LED flash around back, and Nokia’s branding smack in the middle of the panel. The metal back has an antenna line that runs along the long edge of the tablet that makes sure all the radios inside work trouble-free. 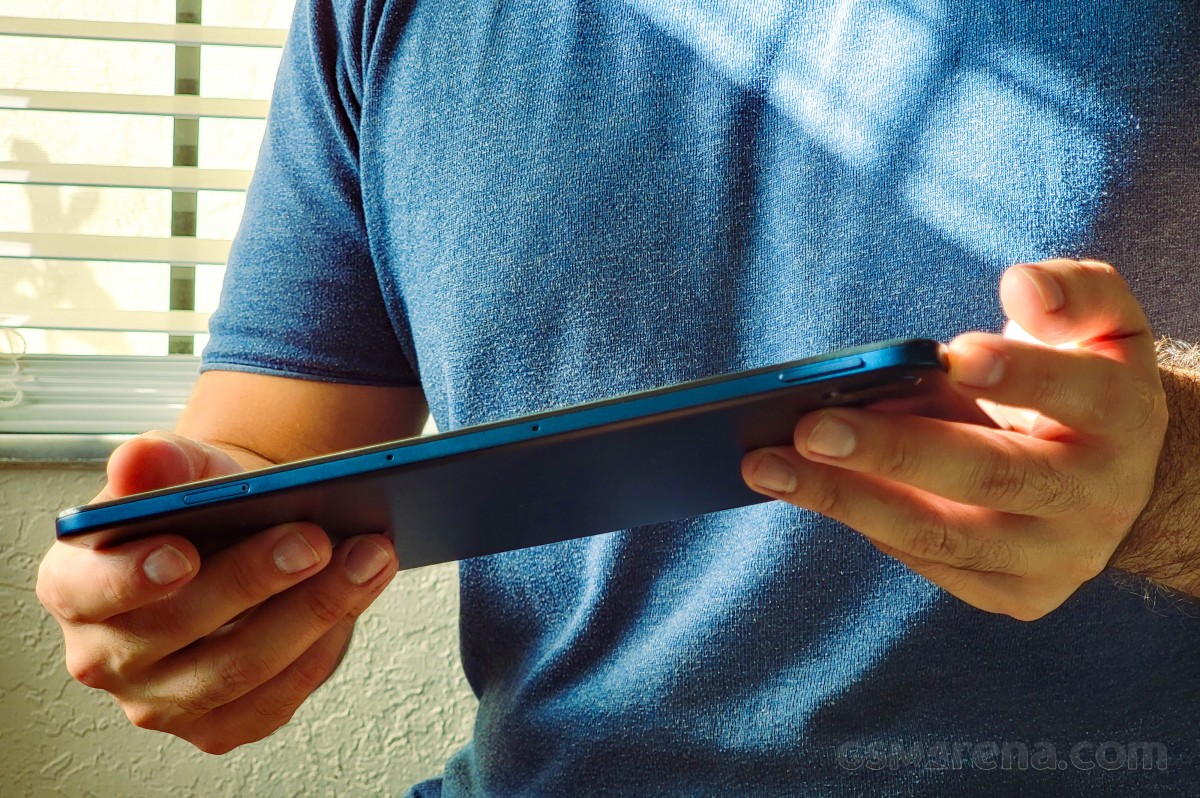 The placement of the 5MP front-facing camera optimizes it for conference calls in landscape mode and the dual-microphones are on the top edge of the phone as well. The display features rounded corners that complement the rounded body nicely.

In this orientation, the power button is on top in the left edge and the volume rocker is on the left side near the top edge. These buttons feel nice and since they are both close to the same corner, it’s difficult to accidentally press them. 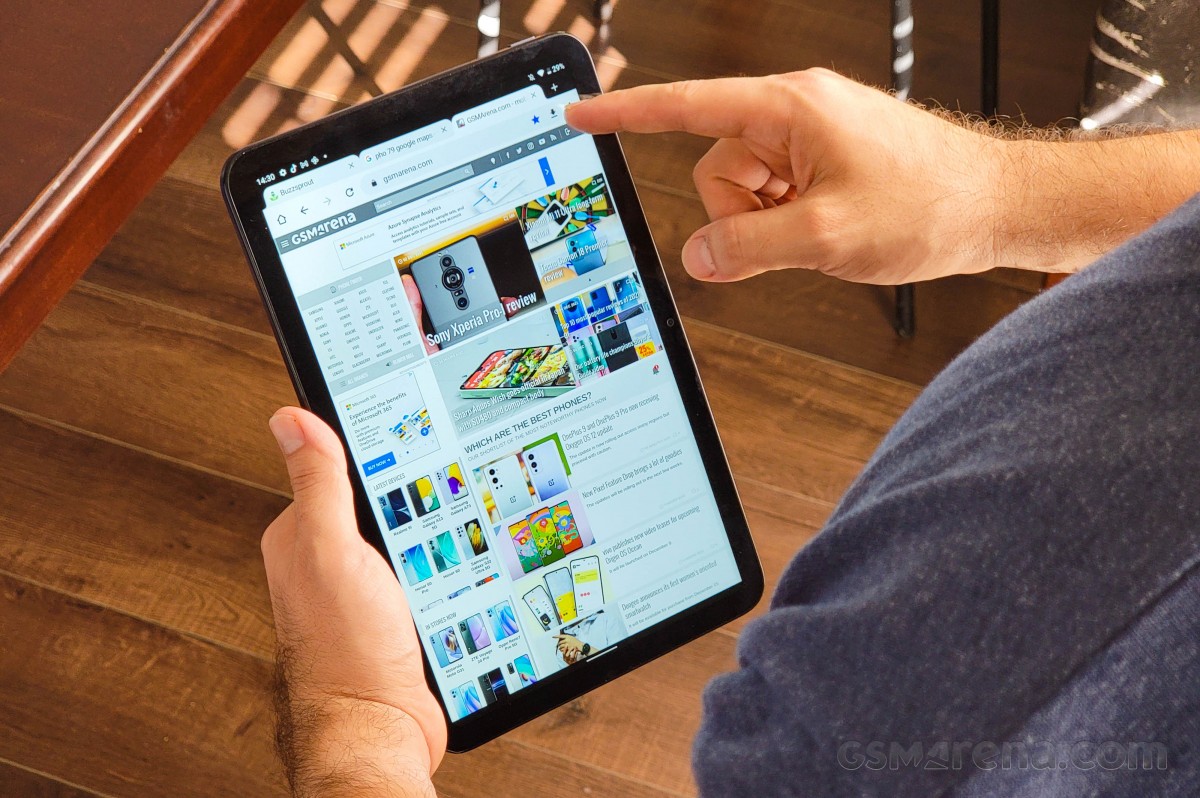 There are speaker grilles on the two sides, again in landscape mode, nicely positioned so they wouldn’t be obstructed by your palms. The charging port is centered on the right frame. The 3.5mm headphone jack has a unique placement in the lower right corner of the tablet. Like, literally the corner. 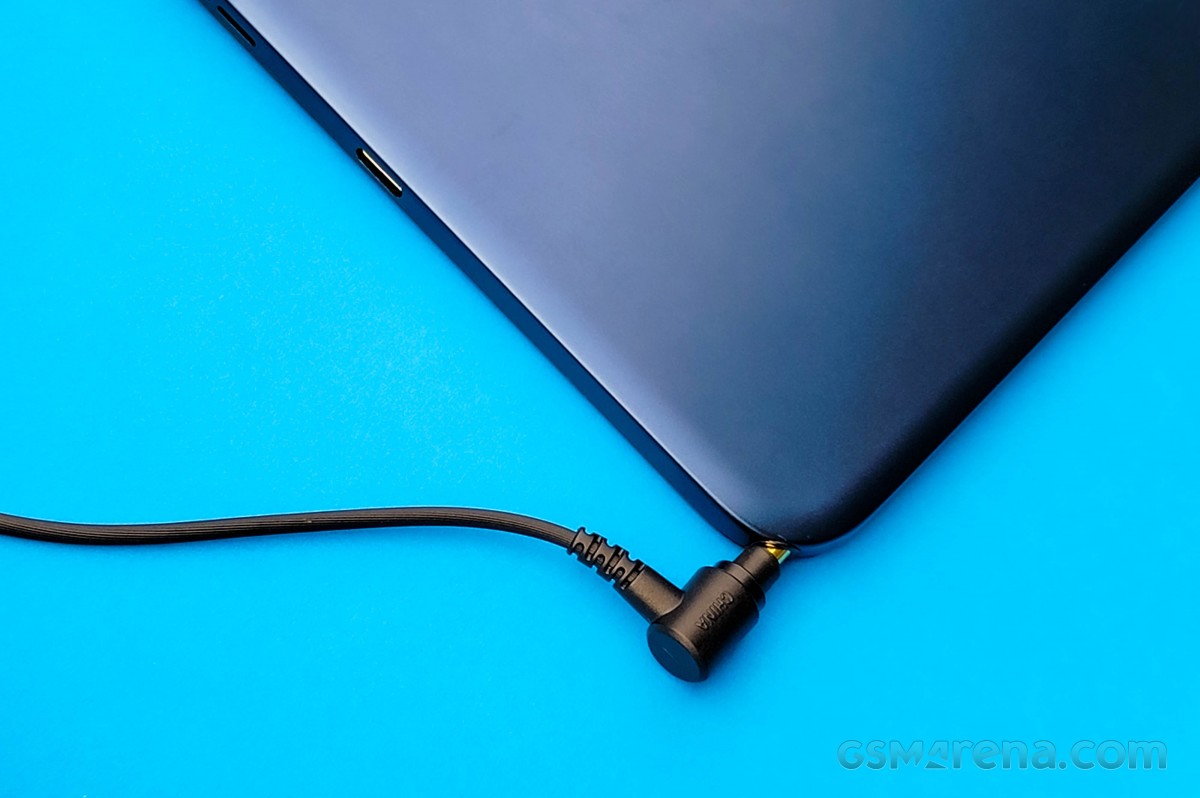 Overall the design is sleek and the build quality is better than the price tag would suggest. We appreciate the metal used and flat edges all the way around.

The T20’s 10.4-inch IPS LCD screen has a 5:3 aspect ratio and resolution of 1200×2000 px protected by conventional tempered glass. The pixel density comes out to a decent 224 ppi. Viewing angles are okay with barely any color-shifting and overall the image quality is very solid for a budget tablet. 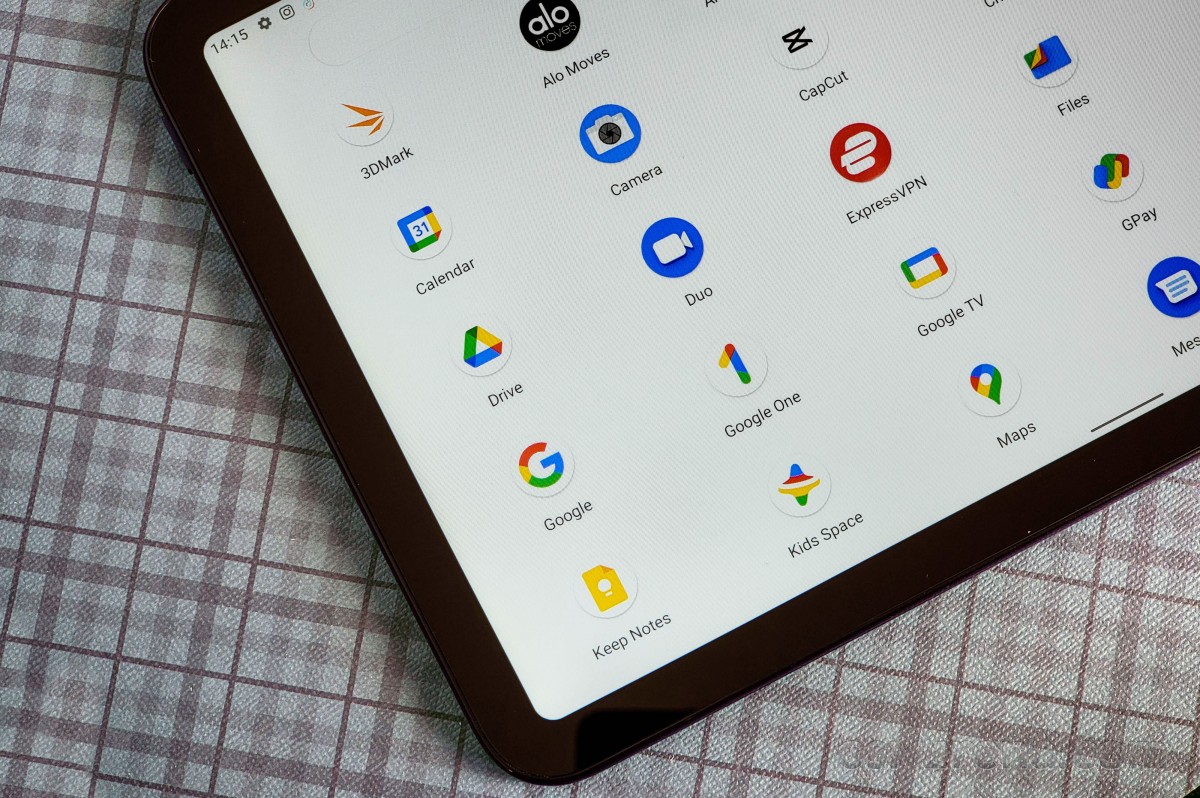 The display is listed to support a typical brightness of 400 nits and in our tests we found the T20 to output exactly 400 nits using the manual brightness slider. Adaptive brightness will push that marginally higher – 422 nits. Minimum brightness is just around 5 nits, which means it’s little trouble using the T20 in a pitch black room.

This means when set to the warmest setting, the display’s accuracy wasn’t horrible. Colors look vivid and lively and pleasant for consuming content, viewing photo albums, or scrolling through social feeds. There’s no support here for the DCI-P3 color space, though.

Unlike some other midrange tablets, the Nokia T20 does not support stylus pen input.

To test the Nokia T20’s battery life, we ran a YouTube playlist at 200 nits and measured a total runtime of 11:06h before the battery gave out. After a 1-hour video conference call with some multitasking in between the T20 lost 11% battery. With this, most users should be able to do everything they need in a day on a single charge. 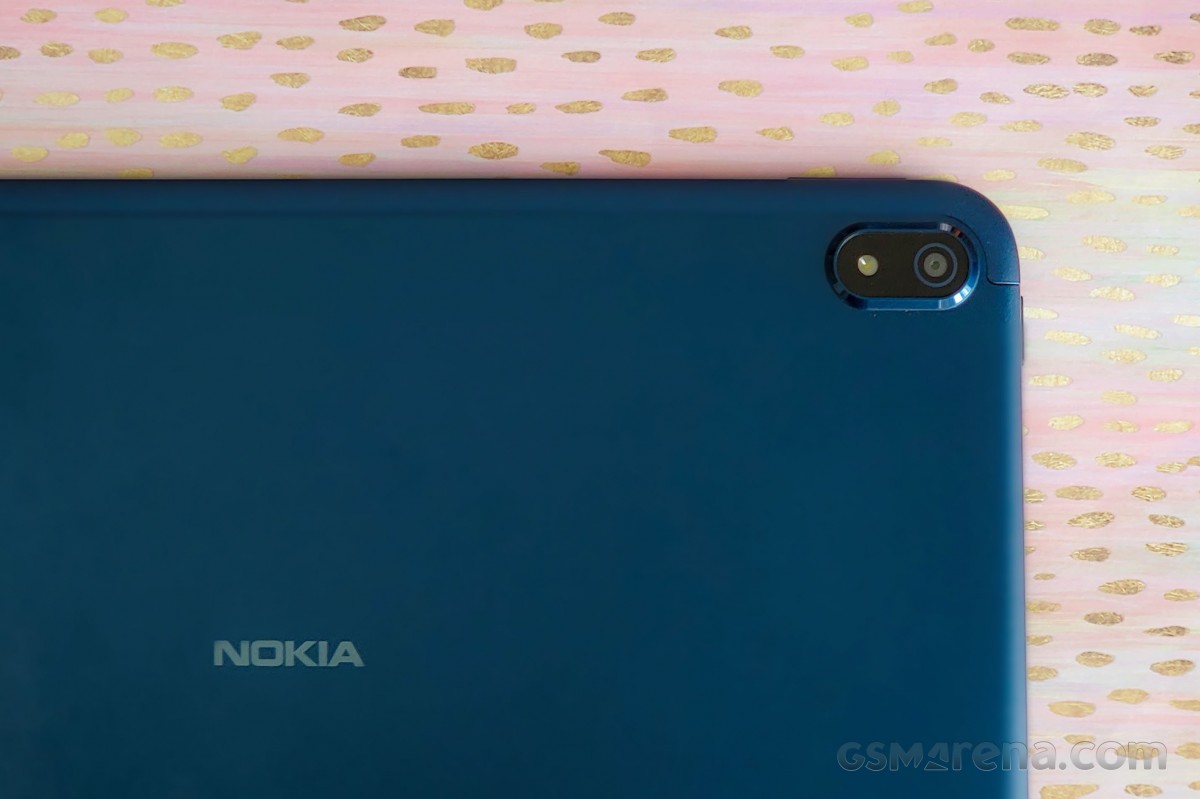 The Nokia T20 is equipped with a 8,200 mAh battery that supports up to 15W charging, though the included charger is rated for only 10W. We tested the included charger and the tablet juiced up to 13% after 30 minutes, 52% in two hours, and a full charge was achieved after four hours and five minutes. Overnight charging would be the way to go with this one then.

Using a 15W charger yielded somewhat better results. You’re looking at modest increase at the half-hour mark (16% versus 13%) but a two-hour charge brought 70%. A full charge took 2 hours and 42 minutes.

HMD promises two years of OS upgrades and three years of security updates for the Nokia T20, which is hard to come by in this price segment. The company isn’t always the speediest in pushing those promised updates though. 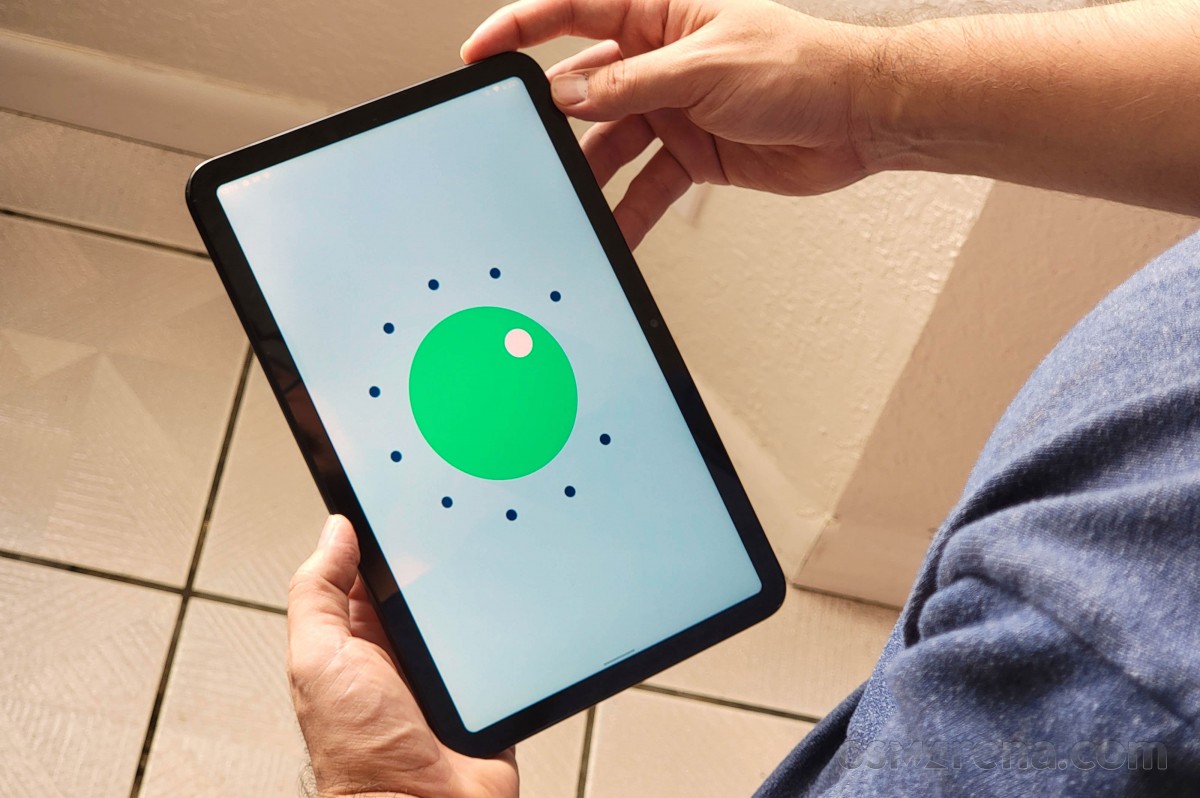 Kids Space is an app built into the tablet. Setting it up isn’t a straightforward process and the instructions aren’t clear. What you have to do is create a new user on the tablet (but it can’t be a restricted user) and then set up that secondary user with your child or teen’s own google account. From there, you can manage everything from the Family Link app and they can use Kids Space.

Parents can manage what their kids can watch, explore, and they can monitor their kid’s app usage. Parents can also remotely lock the devices if needed – all through the Family Link app.

The T20 has Google’s Entertainment Space, which is set where the Google Feed would normally be. Think of this like a tablet version of Google TV, except it also includes games and books. You can add your subscriptions from streaming apps and receive personalized recommendations across three tabs: Watch, Games, and Read. If you’re bored and need to kill some time, this hub would be a pretty good place to start.

Although there isn’t a fingerprint scanner, the tablet supports face unlock. Setup was easy, but unlocking the tablet can be very inconsistent so make sure you set up the feature with the best lighting available.

This tablet is powered by a popular Unisoc Tiger T610 built on the 12nm process. This chipset has 2×1.8 Hz Cortex-A75 cores and six 1.8GHz Cortex-A55 and its performance is comparable to entry-level chipsets from Qualcomm and MediaTek like the Snapdragon 460 and the Helio G80, respectively. Graphics are handled a 2-core Mali G52 which is far from a powerhouse, suggesting some games with come with a graphics quality decrease to maintain playable framerates. 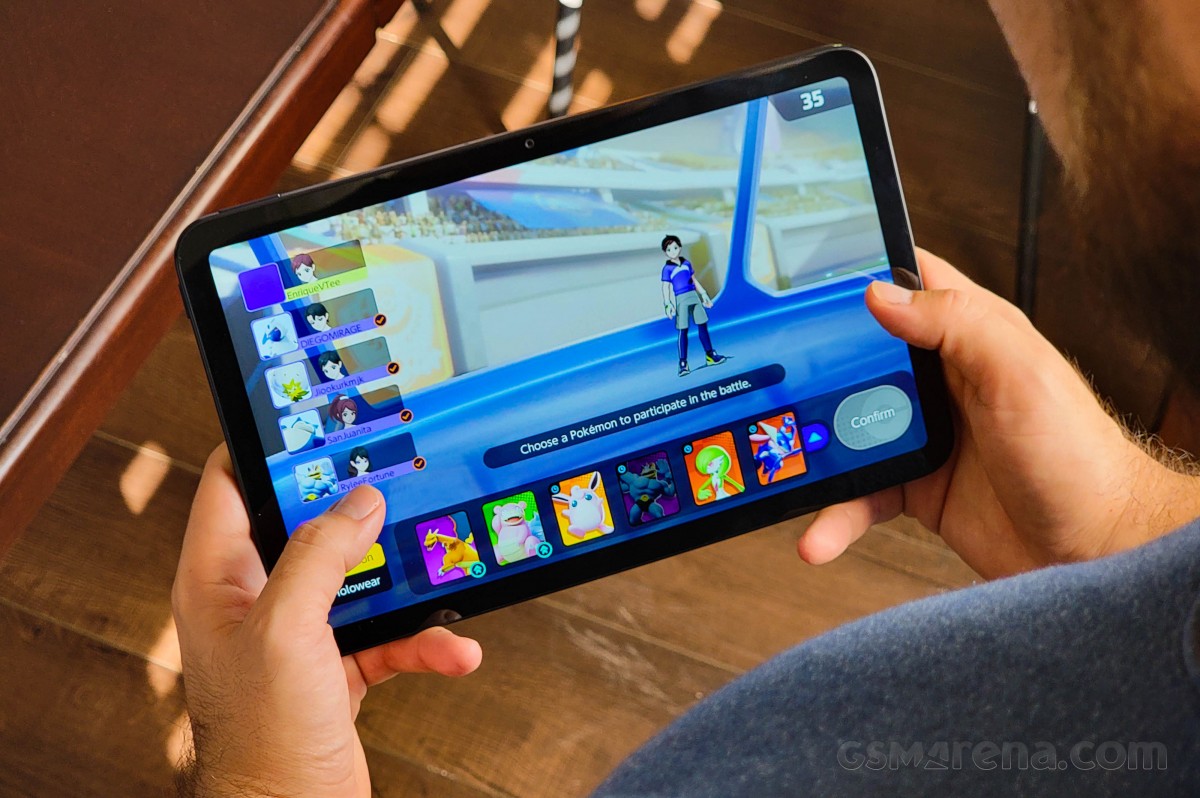 In the US, the Nokia T20 is available only in the 4GB + 64GB configuration. The tablet can be configured with 3GB + 32GB in global markets. Some markets will also offer an LTE version, though the one we tested is the US Wi-Fi-only version. The microSD slot supports up to 512GB of expanded storage.

Benchmark performance scores rank this SoC along the lines of other chip maker’s starter-level chipsets like Qualcomm’s Snapdragon 460, MediaTek’s Helio G80, and Samsung’s Exynos 850. We added some phones to compare their chipsets’ performances to the T20’s Unisoc SoC.

Graphics performance was decent. The dual-core Mali G52 performed well within its class.

As far as real life performance goes, the T20 exceeded our expectations. It kept up with multitasking watching a video during a video call and switching between apps didn’t stutter much. The only time that the tablet did seem to drop frames here and there was whenever we tried to perform other tasks while apps were being installed or updated.

Most games performed fine. We loaded up the most recent cross-platform moile game from Nintendo: Pokemon Unite and it ran very well with no major hiccups or issues.

The Nokia T20 has an 8MP main camera with LED Flash and autofocus. It is capable of capturing 1080p@30fps video. The camera does have autofocus, but no tap to focus. You’ll have to align the viewfinder’s center to the subject and wait for the camera to refocus on its own. 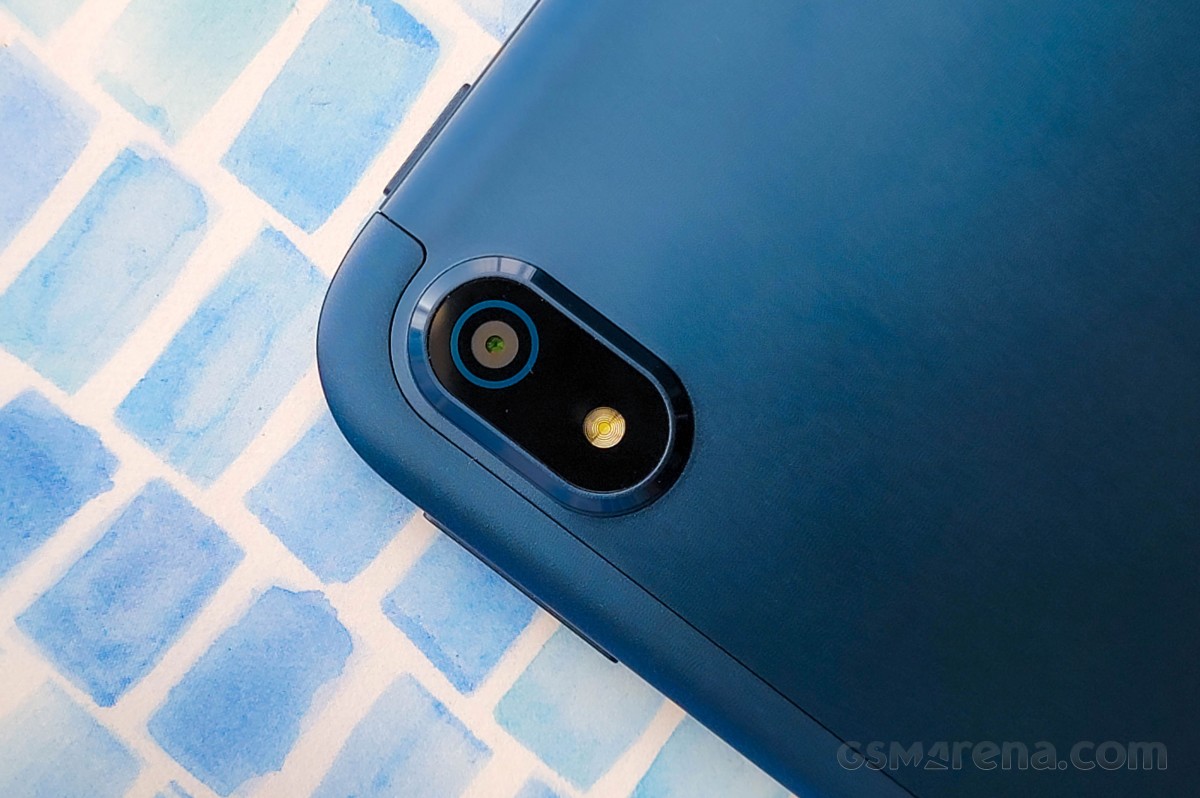 Image quality is what you’d expect from an entry-level tablet. Autofocus works okay most of the time, but you need to be patient with it. The T20’s cameras are equipped for HDR processing, which helps retain shadows and highlights in most scenes. The following samples are all shot with HDR turned on.

Images look decent overall, and colors are not bad. Dynamic range is certainly a weak spot for this camera and photos taken indoors are noticeably softer, but they’re not too noisy. You should be able to use it to scan documents or take photos of small print just fine, which is going to be its main use anyway.

The 5MP selfie camera is the one that might be used more since it’s the default one for video meetings. It takes decent selfies, and it even has a portrait mode for softening the background. Some beautification is also happening on the portrait selfies.

Folks in video calls will be able to see you if you’re in decent lighting conditions like near a lamp or by a window.

Details on the selfie camera are not bad. The focal range is at a nice distance and dynamic range is okay.

The competition and verdict

The Realme Pad comes to mind as it has identical display and resolution to the T20. The Nokia tablet has a slightly larger battery though and an LED flash and autofocus for its camera. The Realme does have a slightly better and wider front-facing camera and a tad speedier CPU. 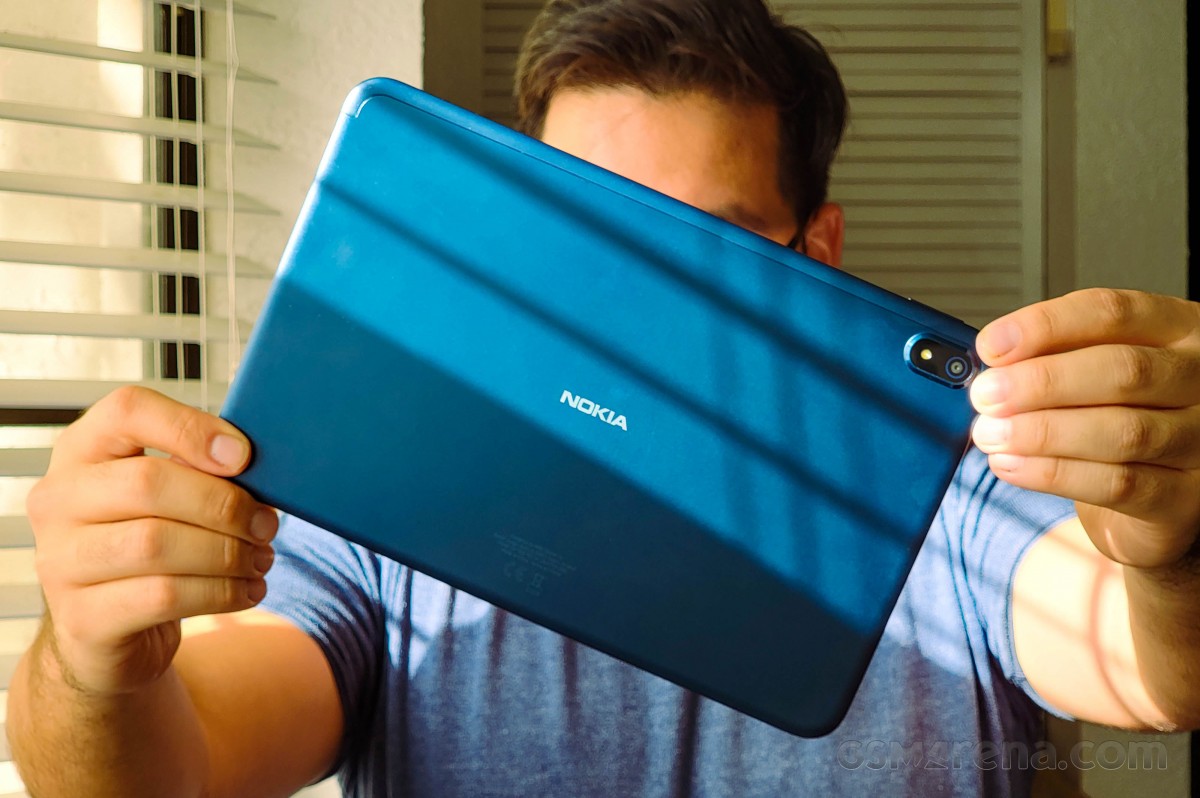 Depending on who will be using this tablet, you may need to shell out some more cash for extra accessories such as a keyboard and a prop-up case. HMD does sell a couple of official cases for the Nokia T20, but you’ll have to supplement them with your own keyboard if the use-case calls for it.

Overall, the T20 fits the price point in the context of the US market. It’s a relatively inexpensive tablet that can do everything you’d need to whether its editing something, consuming content, going to grade school, or opening work files. If you need something more productive, you might want to look towards a Chromebook or a tablet that supports a stylus or S Pen.

Read a File Line by Line With PHP