A substantial part of the Ohio legislature seems incapable of reading the room. Following several months of anti-police violence protests, state legislators have passed a bill that makes it easier for law enforcement officers to arrest anyone for just about anything. (h/t Joe Papp)

The opening of this report by Cleveland’s News 5 gives you the general gist of the bill.

A proposed state law that could make it a crime to shoot cell phone video of police got the green light by lawmakers to move forward following a statehouse committee hearing Thursday in Columbus.

Members of the House Criminal Justice Committee voted to approve the measure despite more than 100 civil rights, first amendment groups and individuals testifying against the measure since it was first introduced.

It seems like this would be a bad thing to do, considering the state of the room these legislators have failed (or chosen) not to read. For one thing, it would target First Amendment protected activity: the filming of public servants. Second, it gives police more power to make “contempt of cop” arrests which, despite the colloquial name, does nothing to make cops less likely to be viewed with contempt.

This isn’t a bipartisan effort to ensure cops are left unharassed when harassing the public. This is a one-sided affair where the “us v. them” attitude has carried over from the cop shop to the legislative branch of the Ohio government. 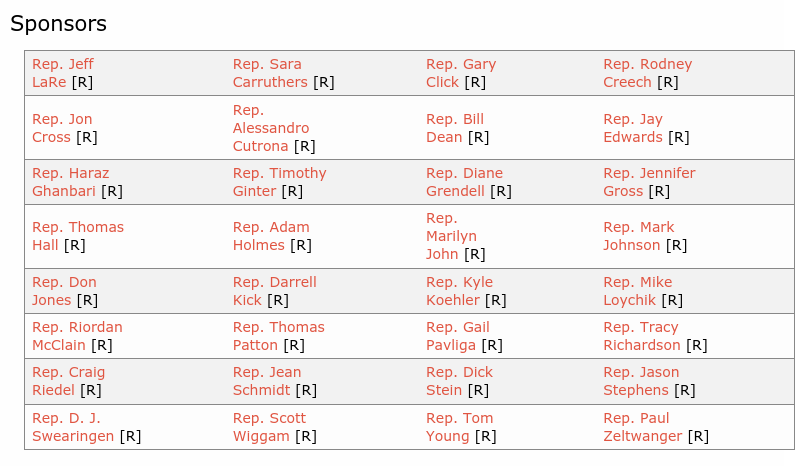 Of course, the bill has its supporters. And they’re all of one (blue) stripe.

The bills sponsors say it would protect both police and the public from harm when police are attempting to clear crime scenes, make arrests or maintain order and is supported by the Ohio Prosecuting Attorney’s Association, Buckeye Sheriff’s Association, Ohio Highway Patrol and the Fraternal Order of Police.

The opponents of the bill have pointed out the law’s broadness, which could be read to could outlaw filming police officers. Or interacting with them in any way when they’re handling a stop or effecting an arrest.

Here’s what the bill [PDF] adds to existing obstruction of justice laws. First, it criminalizes this act of civil disobedience.

(7) Fail to follow a lawful order from a law enforcement

Then it piles on all of this:

(1) Use force or threaten the immediate use of force against the law enforcement officer;

(2) Interfere with or obstruct a law enforcement officer in a manner that does any of the following:

(a) Inhibits or restricts the law enforcement officer’s control of a subject or detainee;

(b) Deprives the law enforcement officer of control of a subject or detainee;

The good news is this caveat has been thrown in at the last minute — a bone thrown to the 100+ rights groups and activists that read the bill’s intent for what it was:

And, as if we really needed the true point of this bill spelled out for us, the police officer who was the epicenter of this seismic shift in public opinion about police officers and their abuses of power made it perfectly clear who cops feel the real threat is when deploying excessive force:

Chauvin’s lawyer isn’t the only one to have expressed this sentiment. Following the killing of Eric Garner by NYPD officer Daniel Pantaleo, one of the NYPD’s police unions said the real problem was bystanders with cameras and suspects wanting to “put on a show.” And FBI director James Comey blamed a half-dozen spikes in violent crime around the nation following the Ferguson protests on people with cellphone cameras “taunting” officers into behaving badly.

If this bill becomes law, it won’t make things easier for police. It might make it easier to effect bogus arrests, but it won’t make the actual job of policing any easier. This will just widen the divide between the police and the policed. Disrespect can be earned much faster than respect. With police refusing to meet their employers halfway — and being given the blessing to keep citizens at arms’ length — the problems people have been protesting about are never going to go away. This bill encourages officers to indulge their worst impulses. And this unwillingness to utilize self-control is a big part of why we’re at the point people are burning down precinct houses in response to acts of police violence.

Thank you for reading this Techdirt post. With so many things competing for everyone’s attention these days, we really appreciate you giving us your time. We work hard every day to put quality content out there for our community.

Techdirt is one of the few remaining truly independent media outlets. We do not have a giant corporation behind us, and we rely heavily on our community to support us, in an age when advertisers are increasingly uninterested in sponsoring small, independent sites — especially a site like ours that is unwilling to pull punches in its reporting and analysis.

While other websites have resorted to paywalls, registration requirements, and increasingly annoying/intrusive advertising, we have always kept Techdirt open and available to anyone. But in order to continue doing so, we need your support. We offer a variety of ways for our readers to support us, from direct donations to special subscriptions and cool merchandise — and every little bit helps. Thank you.