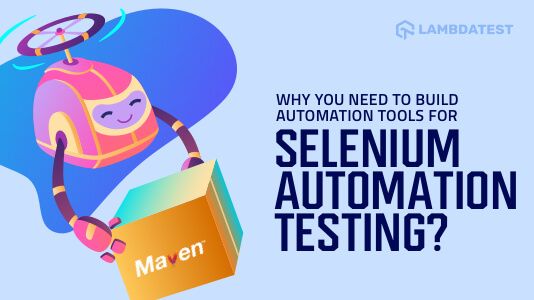 Being an automation tester, we do realize that in a release cycle, time is always of the essence! Selenium test automation helps to save us a considerable amount of time in our test cycles. However, it is pivotal to note the way through which you are executing your Selenium testing scripts. Which frameworks are you using? Are you doing it with an in-house infrastructure or with an online Selenium Grid? Are you making use of build automation tools or not?!

Build automation tools like Maven, Gradle and ANT provide you to accelerate the Selenium test automation even further. Not only do they help you manage build lifecycles, dependencies but they also allow you to perform parallel test execution. In this post, we are going to understand why every automation tester needs a build management tool for Selenium testing.

What Are Build Automation Tools?

Build automation tools allow us to orchestrate our project builds by automating the processes for handling Selenium dependencies, compiling source code to binary & then later packages the binary. All in order to run automation testing. Build automation tools have become pivotal for the software development & testing process. These tools help developers in completing day to day activities like.

Build automation tools play a vital role in Selenium test automation. In most of the small projects, developers usually do the build process manually. But it becomes quite difficult as the projects become bigger. That is why we need to automate these processes and save ourselves some unwanted manual labor. Let us take a look at some striking reasons to build tools that are compelling for every automation tester who is working with Selenium test automation.

Most companies are now moving forward to ensuring the participation of as many teams as possible in a project. Thus, the increase in the adoption of DevOps culture has led to the rise in Continuous Integration. Every firm has a shared repository where the developers integrate the code. But when they do so several times a day, we call this Continuous Integration.

You can also verify each integration with the help of an automated build. The practice of Continuous Delivery usually goes hand in hand with CI. Build automation tools easily integrate with systems including Hudson, Jenkins, Bamboo, TravisCI, TeamCity, etc. This way, they help you to not only build a robust project but also help you to support CI/ CD processes which triggers these projects.

Jenkins, on the other hand, offers you a way to create a pipeline to help you trigger these build projects from one testing environment to another. Using Jenkins you can trigger your build automatically along with tests and deployment.

A build lifecycle defines a sequence of phases to achieve company goals. It defines the process of building and deploying a project. In this case, phases represent different stages in the life cycle. Every firm needs to follow a sequence of steps before they can deliver a product. Since build management comprises hooks or cycle phases, it helps in handling the sequential steps. Default build lifecycle include the following phases mentioned below:

For instance, you have to compile after completing the coding part. Then comes the packaging phase into a bundle such as WAR, JAR, or EAR. However, you might require some pre-packaging tasks beforehand. Build management enables the use of cycle phases for achieving all the above-mentioned tasks.

On the other hand, we can customize some for performing tasks according to individual needs. They also automate common functions such as open, copy, zip or rename files, and reconstruct folders. In addition to automating these common functions, these plugins reduce manual labor in the area of text modification and validation of the project structure.

Plugin support also includes static code analysis, compiling tests, running tests, generating test reports, etc. Not only that, but these plugins also help other teams use the Selenium test automation frameworks over different programming languages. They automate the creation, assembly, and packaging of executables with the help of metadata. After that, we can install these into our local repository and deploy them to a remote repository for other teams to use.

One of the most lucrative reasons to opt to build tools for Selenium test automation is to leverage parallel testing. Automation testing is a big time-saver for developers and testers! However, if executed in a sequential manner, it can slow the team rather than accelerating it. Your websites or web-applications are bound to grow over time, and with it grows your Selenium test automation suites or requirements. Eventually, you will reach a point where you would have to leverage the parallel testing in Selenium, to deliver your projects before the deadline. Build automation tools can help you do that with ease.

In fact, there are few test automation frameworks such as Gauge which allows parallel testing with Selenium through Maven plugin. Here is an example from one of our GitHub repositories to run Gauge with Selenium.

When one piece of software depends on another, we call that a dependency. They include files, a group of files in a package, jars, internal and external libraries present on the network. It’s important to resolve and manage these dependencies. This is where build tools play a crucial rule.

Build tools enable an automated resolution of dependencies. For instance, you wish to use the current and updated version of a library. Now, if you do this manually, you will have to remove the current JAR file first. After that, you have to download the latest version from a repository and add it to the project. In some cases, you might even need to download transitive dependencies and add them to your project as well.

Build tools help us modify dependency configurations which are flexible. These configurations are in the form of files such as build.Gradle, pom.xml, etc. Build tools can also create local structures or local repositories. After that, they download and cache the dependencies and do this again if needed.

Commands with dependencies are the most time-consuming to execute. But knowing how you can order command execution is even more challenging. This is because in most cases, we need to feed the output of one command as an input to another. Thus, if the project is massive, it becomes quite overwhelming to manage it all manually.

Build tools to automate these tasks and help employees concentrate on other important work. These tools also automate the building of executables. This way, every developer can build as well as run the software on their machine.

I hope you now know the perks of using build tools for Selenium test automation. Now, the next question that arises is. Which one to use? Well, that depends upon which programming language for testing are you comfortable with?

Maven: An open-source build automation tool, Maven helps to report and document from a central piece of information. Maven can also be used to manage projects written in C# and ruby.

Pybuilder: PyBuilder is a build tool written purely in Python.PyBuilder is based on the concept of dependency based programming, but it also comes with a powerful plugin mechanism, allowing the construction of build life cycles similar to those known from other famous (Java) build tools.

Phing: PHP tool based on Apache ANT, It uses XML build files and extensible PHP task classes which make it easy to use.

Gulp: With 31,600+ GitHub Stars, 4,400+ Forks and more than 3300+ plugins, Gulp is a streaming build system for node.js to help developers automate & enhance their development workflows.

Grunt: With 12,000+ GitHub Stars, 1500+ Forks, and more than 6300+ plugins, Grunt is a renowned task runner for JavaScript, which was originally designed with the purpose of delivering a build tool interface to JavaScript developers through the command line.

With an increased focus on Selenium test automation, the lack of awareness about build tools can hold you back. Automating repetitive tasks is a major factor for delivering your projects on time. Doing so in parallel with the right build automation tool can make your release past like a breeze!

If you are a novice automation tester, then it is important for you to keep in mind the benefits of using build tools for your upcoming Selenium test automation projects. If you are finding it a little overwhelming then it is best recommended to start small. Start off by tweaking little things in bits to automate smaller test cases. Gradually, you & your team can have a more streamlined process for fully utilizing the potential of build automation tools.

Create your free account to unlock your custom reading experience.